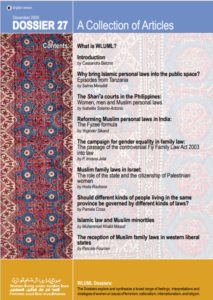 In some contexts, such as Sri Lanka, women from the minority have been demanding positive reform in the existing separate legal system that is binding upon Muslims and in the Philippines an entire alternative Code has been drafted; in Israel, Arab women’s groups have focused on demanding access to the State Family Court, rather than reforming the Shari’a Courts).

In other contexts, such as Canada, women within Muslim communities have successfully resisted the introduction of such systems for fear of their impact upon their rights. In yet other contexts such as India, where minority MPL have not yet been codified, women have adopted various strategies including demands for a uniform civil code as well as advocacy efforts to ensure greater protection for women’s human rights within the uncodified personal laws that apply by default to those marrying under Muslim laws.

Activist women’s concern comes against a background where our multiple and complex identities are being increasingly reduced to a single, religious identity. This identity is invariably defined by patriarchal and right-wing forces within a religious community, usually with the connivance of the state through policies of multiculturalism or constitutional guarantees of ‘religious freedom’ which silence the voices of the marginalized, progressives and secularists. Often, too, this identity is presumed – by the state or wider society – as a consequence of a person’s parentage or ethnicity, and decisions are made for them on the basis of this presumed identity.

Although this is a global trend, not restricted to Muslim contexts, as WLUML our focus is on Muslim minorities. However, the state’s treatment of other minorities such as Jews, Hindus or Christians does have meaning for women activists’ engagement on issues of MPL. Sometimes preferential treatment or recognition historically given to other minorities is used by the Muslim extreme right to demand separate family laws, and sometimes the strategies used by progressives within other religious communities to ensure positive state policies or changed community attitudes can serve as inspiration.

The right-wing’s political manipulation of issues of personal laws and identity is evident from the fact that the overwhelming focus is on family laws although personal laws include a far wider range of matters. How often do we hear demands for obligatory zakat payments for Muslims? Why do not as many insist upon non-interest bearing (riba-free) banking or mortgages? It is because by controlling women and creating fear of their autonomy that the dominant forces within a community can retain their control over the entire community – and indeed influence even wider society.

A great deal of the theoretical reflection and academic argumentation in favour of separate Muslim family laws for minorities (almost always based on regressive interpretations) is currently coming from migrant Muslim communities in Europe and North America. These are contexts where the long-established right-wing Muslim political parties of South Asia and the Middle East have recently gained considerable influence and can command substantial resources – possibly more so than Muslim minority communities in the global South.

In addition, state policies of multiculturalism in some contexts, the widespread influence of cultural relativism, and the unholy alliance between some leftists and fundamentalists have given even greater prominence to these regressive voices.

The political content of this argumentation in Europe and North America is clear from the fact that the proponents are rarely able to specify the precise content of such separate family laws. To do so would expose the myth that Muslim laws are homogenous and would reveal the human character of the interpretations that dominate our lives. It would also expose the fundamentally misogynistic approach behind such demands because the precise content of separate MPL would, according to their interpretations, include recognition of polygyny and instantaneous unilateral talaq by men.

By engaging in lengthy theoretical debates over whether Muslims in migrant or minority contexts can be termed as being part of ‘Darul Harb’ (‘the abode of war’ – a term used among conservative traditions to refer to hostile areas not under Muslim rule) and coining terms such as fiqh al-aqliyat (separate jurisprudence for Muslim minorities), the proponents of separate laws for Muslims in effect obscure the main question: what legal structures and provisions would best ensure social justice, specifically guaranteeing the realisation of women’s rights within the family? Solutions may be different in different contexts and one solution may not be the most option-giving for all women, but the questions must remain the same.

The papers in this Dossier as usual cover a range of styles. Some are historical and descriptive, while others focus more closely on the impact of existing systems affecting Muslim minorities and reform efforts. In all it is clear that women find that the existing system does not uphold their human rights.

The variety of women’s strategies is evident. Whereas in the Philippines women have proposed an alternative Muslim Family Code, in Fiji the effort was to introduce a uniform code applicable to all women. Equally, the contexts are diverse, from long-established minorities in East Africa and India to more recent arrivals in Europe and North America.

Despite this diversity, a common thread emerges across the contributions: that of the political manipulation of identity and women’s autonomy by right-wing political forces and the immense difficulties women face in challenging discrimination. In each of these contexts, the wider political situation in which minorities are ignored and oppressed, complicates demands for gender equality.

The success of Canadian women’s struggle against the introduction of Muslim laws in family matters (the news of which reached after the Canadian paper in this Dossier was written) has had a far-reaching impact. The Extreme Right in Britain and India were both using the example of the Canadian developments to bolster their own demands for a separate system for Muslims and the establishment for formal Shari’a courts respectively. These demands have now fallen silent. Moreover, the Canadian experience revealed the tremendous value of alliances across communities and of international solidarity.