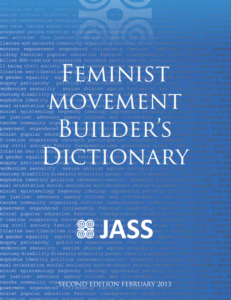 Words matter Within the local-to-global context of citizen action, many activists and scholars agree that we face a “crisis of discourse”. Words that once imparted radical visions of social change have been co-opted by more powerful groups, rendering them devoid of their original meaning or politics. For example, when the World Bank uses terms like “empowerment” or “civil society participation,” they mean something quite different, or at least far less transformative, than what activists originally envisioned. Since feminist activists and movement-builders depend on the political meaning of words, we at JASS decided to generate and claim our own definitions. The evolution of the JASS’ Feminist Movement Builder’s DictionaryThe idea for this dictionary originated with JASS Mesoamerica, where feminists and women activists from different social movements found themselves creating alternative terms to describe their context and strategies since old ones had lost their meaning. Alda Facio, a Costa Rican feminist writer, activist, and lawyer with JASS wrote the first version, Diccionario Feminista, in Spanish. Her goal was to “free words from the box or mindset of the patriarchal paradigm”. As JASS’ work deepened in Southeast Asia and Southern Africa, we quickly realized that we had all been searching for and “inventing” new words to more accurately describe the contexts and dynamics of power within which we’re operating, and the myriad ways in which women experience and resist oppression. We began building the English version of the Feminist Dictionary to develop a common language, history, and sense of purpose within the JASS community. As more people contributed, we quickly realized the dictionary’s potential as a vehicle for the political act of defining our world based on a distinct feminist political perspective – one that is constantly shifting and recognizes how distortions in social, economic, and political power and privilege form the basis of inequality and injustice.