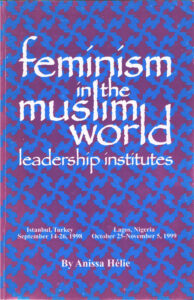 Co-organised by the Center for Women’s Global Leadership & Women Living Under Muslim Laws the first two Feminism in the Muslim World Leadership Institutes took place in 1998 in Istanbul, Turkey, and in 1999 in Lagos, Nigeria.

These two-week intensive residential institutes drew on the Global Center’s expertise in the area of leadership enhancement and human rights while emphasizing WLUML’s chosen themes: global solidarity and networking; the issue of diversity and commonalities within the Muslim world; and feminist organizing for human rights education in Muslim countries and communities.

This book focuses on the planning of the Institutes and the major topics and debates that occurred during the Institutes. It hopes to offer inspiration to other women to borrow and adapt according to their own needs.