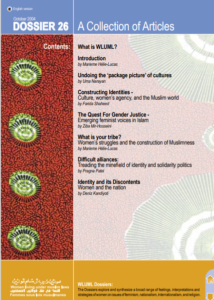 This volume seeks to address issues of concern to women in Muslim countries and communities around the concepts of identity, politics, movements, and alliances. Crucial to identity politics is the fraught question of alliances: all the articles, ultimately, address this question.

While more and more rightist political movements – including the fundamentalist movements that most affect women’s lives – constrain and force us into one single identity, we struggle to reclaim our multiple, concomitant, non-antagonistic identities: gender, class, ethnicity, race, religion, culture, etc.

While more and more rightist political movements see such a single enforced identity as given by birth, we, women, seek a self re-definition of the given through free choice and individual adhesion.

While we witness the erosion of the concept of nationality, which can be chosen and changed, to the benefit of non-chosen identities imposed by chance, such as location at birth or being born into a religious family or country, etc…, women are probably once more at the forefront of the right to choose for themselves how to behave as women, how to dress, whether to work for wages, where to live, with whom, whom to love, how to define their religion or whether to have one at all.

This volume seeks to address issues of concern to women in Muslim countries and communities around the concepts of identity, politics, movements, and alliances. Crucial to identity politics is the fraught question of alliances: all the articles, ultimately, address this question.

Refusing to essentialize either women or culture, Uma Narayan rejects the ‘package picture of culture’ and criticizes the labelling and use of our national and cultural differences (‘western culture’, ‘non western culture’, ‘Indian’, ‘Muslim women’, etc…) “as if they were entities that exist neatly distinct and separate in the world, independent of our projects of distinguishing among them, obscuring the reality that boundaries between them are human constructs.” She thus seeks alliances with like-minded women across ‘cultures’ rather than within the ‘natural’ choice of women of the same culture. This places identity in the realm of politics: it becomes a deliberate political choice of the individual, rather than a given by birth.

Ziba Mir Hosseini positions herself as a woman of faith who is also a feminist. Although in the history of the Middle East, the advocacy of women’s rights has been used by the colonial project and thus rejected by many nationalists and anti colonialists, and for most modernists and liberals it was Islam that was to be rejected, she speaks for the growing number of women who have come to see “no inherent or logical link between patriarchy and Islamic ideals and no contradiction between Islam and feminism.” She advocates a “new consciousness and discourse that is feminist in its aspirations and demands, and Islamic in its language and sources of legitimacy.” She sees the inequalities embedded in Islamic law as human constructions that go contrary to the very essence of divine justice. Thus, she calls for “un-reading patriarchy in the sacred texts.”

Stemming from the same historical analysis of the Middle East, Deniz Kandiyoti argues that by making women the ‘mothers of the nation’, the demands of the nation on women may appear just as constraining as the tyranny of more primordial loyalties to lineage, tribe, or kin, the difference being that such demands are enforced by the state and its legal administrative apparatus, rather than by individual patriarchs. One should therefore pause and consider the particular perils of a modernist position on women and gender relations in many post colonial societies, and even in secular ones. Modernity is invested with different meanings for men who are relatively free to adopt new styles of conduct and for women who have to be ‘modern-yet-modest’.

Protesting the merging of ethnicity with religion within identity politics, Farida Shaheed criticizes the over determination of Islam in analysing women’s lives such that a universality and uniformity that does not exist is applied to Muslim contexts. She points at the inequalities and at the dynamics of power and identity. Denouncing the political use of religion and culture, she uses the example of the network Women Living Under Muslim Laws to suggest new modes of interaction and alliances.

Marieme Hélie-Lucas positions herself as an atheist and denounces the unholy alliance in Europe between Muslim fundamentalists and the ‘Coward Left’ cum Human Rights that together build up ‘Muslimness’ as a transnational ethno-cultural identity that, like the original sin, cannot be washed away: one cannot go beyond it. Many fail to identify, under the pretence of a religious claim, the extreme right nature of this political movement. This has dramatic implications for women’s struggles: overlooking the bright, inventive, witty, and brilliant variety of ways in which women strategize and seek alliances on the ground, the unholy alliance will only accept the strategies ‘from within’ religion as truly representing the essence of women’s identity, thus delegitimizing them and depriving them of a vast area of battling ground and potential alliances.

The article by Pragna Patel addresses more directly the issue of alliances in a context of migration and class that increases its complexity. Building on her practice in an autonomous Black women’s group in the UK, she states that identity and alliance building are closely connected, for the identities one chooses can either limit or increase the potential for alliance building, and identities are forever negotiated and renegotiated in social and political processes. Resisting imposed identities, by the community, the anti racist movement, and the state, that all sometimes overtly, but more often tacitly, demand subjugation of other identities, and the juggling of different intersecting identities of race, gender, and class – she forcefully addresses the question of multiculturalism that is especially damaging for women while it replaces a former, less articulated policy of integration. Multiculturalism presents a progressive face, recognizing as it does the desire to retain a distinct identity rather than to be submerged in the dominant culture; at best it promises a tolerance of heterogeneity. But in fact, multiculturalism conceptualizes minority communities as homogeneous entities, with no differences from within. Even more dangerous is the endorsement and appointment by the state, as authentic spokepersons for the community, of unelected, self appointed community leaders who are generally religious conservative males. Multiculturalism is thus utilized to great effect by fundamentalist forces seeking to control women’s sexuality and to prevent the building of alliances and progressive movements. Towards that end, differences have been emphasized, distorted, and exaggerated. In this difficult context, Pragna Patel gives concrete examples of being caught between the dangers of courting, and the need to court, religious leaders in order to build ad hoc alliances with them to defend specific women’s cases.

Running through most of the articles is the sense that being labelled Muslim, far from describing the chosen faith of true believers or their chosen or reclaimed identity, has become an ethnicity, a race, that most resembles the way in which Jews have historically been constructed as a race or ethnicity. This fundamentalist project is backed by forces, including sometimes by women themselves and by human rights groups, that should not, in principle, ally themselves with extreme right political forces (such as fundamentalists); this is a terrifying warning sign of the invasive political nature of this fascist ideology. Such a blatantly imposed identity leaves little room for meaningful alliances with politically likeminded comrades and leaves us in the chains of kin/tribal/god/birth-given loyalties.

This is why, in my view, the struggle of believers to reclaim and reinterpret their faith out of the grip of fundamentalists and the struggle for secularism, as well as the struggle for the right to be a non believer in a Muslim family or nation or community, can go hand in hand and reinforce each other in a true spirit of respect for one another. Moreover, the refusal to subsume or to single out one of our identities to another, the desire to claim them all, concomitantly, and the need to reconcile them within us is our common force.