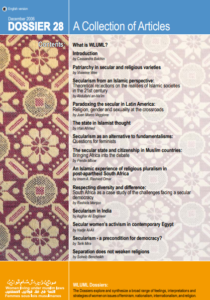 In the context of globally rising extreme right politics justified with reference to religion and rising neo-liberalism’s impact on democratic governance and social inclusion, it is time to discuss secularisms in depth.

We use the plural ‘secularisms’ to highlight the fact that we must first explore the multiple understandings and models of ‘secularism’. Some, especially those working in the French context or influenced by French political experiences, prefer to avoid the term altogether and use the very specific term laicité instead – for reasons discussed in various contributions included in this volume (Bencheikh, Mira).

There are numerous questions urgently needing answers. How do we relate these multiple understandings of secularism to our own diverse contexts both strategically and tactically? How do believers and those who choose other markers of identity relate to the various models: are secular and faith-based initiatives necessarily dichotomized or can common ground be found? How do secularisms relate to fundamentalisms, ‘extremists’ and ‘moderates’? What is the specific gender impact of each model of secularism? What do feminists do about the push (including from donors, mainstream human rights organizations, etc) to privilege religion-based initiatives? How do we call

for the separation of the state and religion or religion and politics without reinforcing the public-private dichotomies that feminists have critiqued for so many decades? How can cultural ‘difference’ be accommodated without essentializing communities and reinforcing patriarchal control of women’s lives? How can feminists ensure that secularisms become a means of protecting and promoting the precious space for alternative visions of society?

These are just some of the questions feminists need to begin discussing in order to define more clearly the changes we want to see and the systems that will work best for women, and in order to develop a movement that is more inclusive and more effective.

This volume seeks to contribute to these discussions by presenting various analyses of secularism, from the perspective of theory as well as lived experience in contexts as diverse as Algeria, Agrentina, China, Egypt, France, India, Italy, Senegal, South Africa, and Sudan.

Wee begins the volume with a brief warning that secularism is no solution to patriarchy. This is followed by two lengthy discussions (from Muslim scholar Abdullahi an-Na’im and Argentinian academic Juan Marco Vaggione – both of whom clearly also see themselves as human rights activists) of possible models as to how secularism may work to protect and promote human rights in contexts where religion – be it Islam or Christianity or any other – may have a prominent place in society. Soheib Bencheikh, known as the ‘Mufti of Marseilles’, meanwhile makes an impassioned plea for French-style laicité – as the only means of guaranteeing the flourishing of Islam in Europe.

If our discussions are to lead to effective analysis, it is also important to understand the fundamentalist approach to the state. Therefore, we have also included Irfan Ahmed’s brief but fascinating examination of how one of the chief ideologues of Muslim fundamentalism came to his views on the relationship between state and religion.

In a conscious effort to redress the imbalance in the contexts and regions generally covered in discussions on secularism, we have included a number of contributions from Africa, including an original paper from Senegalese feminist Penda Mbow. We also carry two items relating to the challenges facing post-apartheid South Africa, the first from Imam Rashied A. Omar which suggests a framework for multi-religious interactions in post-conflict societies – based on pluralism and tolerance and secularism in public life. The second, an original contribution from Rashida Manjoo, then fleshes out how those ideals can go astray – with a specifically problematic impact on gender rights. The extreme discriminations that can arise in a supposedly ‘secular’ constitutional context is a theme also reflected in the transcripts of WLUML’s panel on secularisms at the 2005 AWID Forum, notably the presentation by panelist Vahida Nainar regarding India.

Nadje al-Ali outlines the challenges facing secular women’s rights activists and their constructions of theory when attempting to counter fundamentalism in the highly charged Egyptian context.

Finally, both Tarik Mira and Asghar Ali Engineer emphasize popular traditions of secularism in Algeria and India respectively, and decry the failure of the national political leadership since independence from colonial rule to allow secularism to flourish – thereby, both argue, undermining the development of democracy locally.

In this volume we have included a new section on ‘Related Materials’ which includes a brief selection of relevant items that were either more news-focused or action-oriented (press statements, calls for action, etc) but which we felt were an important background or added resource to our discussions.

We expect that WLUML networkers, our allies and the wide audience that our Dossiers reach will have very different views on the items we have included in this volume. Indeed, there would be no need for this theme if we all shared identical views. However, we hope this selection of analyses, experiences and resources sparks debate that will take our collective and individual activism forward to pro-actively ensure that concrete alternatives to fundamentalisms are made as visible as possible.