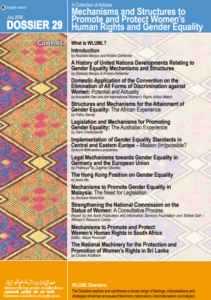 In addition to the work of multi-national institutions, the theory is that national gender machinery can play an important role in the struggle to protect and promote women’s rights. Catherine Albertyn argues that national machinery for the advancement of women “… consists of structures, mechanisms, and strategies for achieving equality for women as participants, decision makers and beneficiaries in the political, social, economic and cultural spheres of life.”

Throughout the past several decades, the concepts of both women’s rights and gender equality, has been gaining social and political attention, in the quest to advance the interest of women. Both international and local institutions, and other governance structures, have been developing gender-based strategies for improving their legitimacy, efficacy and capacity. At the same time, United Nations declarations, conventions, and resolutions have increasingly focused on gender equality and the promotion of women’s human rights.

The papers in this Dossier provide an overview of different country and regional experiences in the quest to achieve the promotion of both women’s rights and gender equality. Varying from country to country, initiatives include laws, policies, structures and mechanisms. In almost all countries, existing mechanisms tend to be incorporated as part of government structures. Whether functioning within an established ministry or given a more autonomous position, the role of these machineries, and the mechanisms they put into place, maintain similar goals. However, the mandates, responsibilities, and resources available to each, vary. The papers raise many questions, including: Are separate structures for the advancement of women necessary? Who makes the decision to set up machineries at a national level? What are some of the reasons for doing so? Through what mechanism is the machinery created? How do women’s machineries vary from context to context? In what ways do they impact society? What are the successes and challenges in the different contexts?

In response to numerous requests, from members of the Women Living under Muslim Laws Network (WLUML) for best practices and practical guidance on machinery for the advancement of women, an internal working group was set up to address the call for information. Desktop research was undertaken by students enrolled in the Human Rights Clinical Advocacy course at the Human Rights Program at Harvard Law School. The students who worked on the project under the supervision of Rashida Manjoo are: Mary Ann Franks, Alexis Loeb, Jessie Rossman and Erin Thomas. The research project was undertaken on behalf of WLUML and included an in-depth case study of South Africa’s efforts at promoting and protecting women’s human rights. The research findings have served two purposes: firstly, it was shared with relevant stakeholders within South Africa as an analysis of the successes and challenges that exist in the promotion and protection of women’s human rights in that country. In addition, a synopsis was presented at the international conference in Malaysia. The International Conference on “Mechanisms and Legislation to Promote and Protect Gender Equality” was jointly organized with the Women’s Centre for Change, Penang (WCC). It was held in Malaysia in August 2006. This conference was financially supported by WLUML, the WCC and the Asia Foundation. The logistics for the conference was undertaken by the staff of the Women’s Centre for Change. Special thanks are due to them for their professionalism and caring, both prior to and during the event. The conference would not have been a success without their assistance. We appreciate the assistance received, and are truly grateful for the collaboration.

The contributing papers to this Dossier were originally presented at the international conference. Subsequent to the conference, their content has been edited by both the authors of papers and editors of this Dossier. In many papers, changes have been made to reflect current policies and status of their countries’ gender legislation and mechanisms. The conference offered a unique cross-regional perspective and exchange on gender equality legislation and mechanisms with a particular focus on lessons learned through the process of designing and implementing national machinery for the advancement of women. Participants and contributors included experienced practitioners and their contributions reflected geographic diversity ranging from information on machineries in Africa, Australia, Central and Eastern Europe, Germany, Hong Kong, Iran, Malaysia, Pakistan, and Sri Lanka. This conference provided a forum for participants to share and learn from the successes and challenges experienced in other countries through insightful presentations and innovative discussions. In addition, a brief discussion was held at the conference, on the development of women’s charters as a tool for the advancement of women’s rights. This is a particularly useful tool in contexts where there is a lack of political will to set up women’s/gender machineries. It is also a useful tool that can be used to mobilize women and help start a women’s movement. The work on women’s charters will be pursued by WLUML in the coming year. Due to financial and time constraints, contributors from North and South America were not included in the international conference. Despite this shortcoming, we hope the following papers will offer a rich discussion and snapshot into the similarities facing mechanisms for the advancement of women.

Download Dossier 19
Facebook Twitter Pinterest
Previous LinkInternational: The UDHR60 Campaign and the Stop Killing and Stoning Women campaignNext LinkMurder in the Name of Honour: The true story of one woman’s heroic fight against an unbelievable crime.