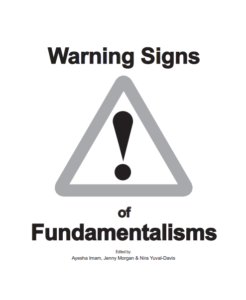 Fundamentalist movements are political movements with religious, ethnic, and/or nationalist imperatives. They construct a single version of a collective identity as the only true, authentic and valid one, and use it to impose their power and authority. They usually claim to be the representatives of authentic tradition, and they speak against the corrupting influence of modernity and ‘the West’. However, fundamentalists are far from pre-modern. To promote their project, they use all modern technological means available, from the media to weaponry. Furthermore, the vision they conjure up is a constructed and selective vision, rather than a revival of something in the past. Since 2000 the popular appeal of fundamentalisms has been growing across the world and different communities.

The use, reproduction or transmission of any part of this publication in any form or by any means must be acknowledged.