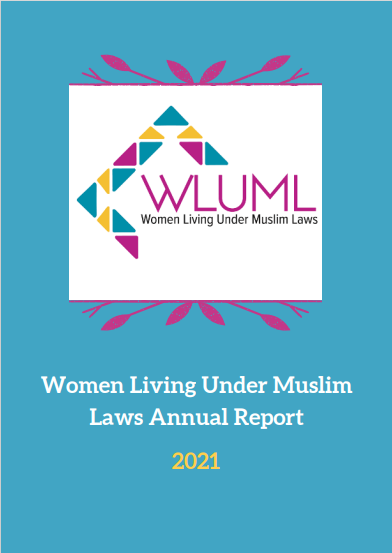 A central principle, since WLUML’s inception in 1984, has been to be an independent movement for the promotion of women’s human rights. Over the years our network has grown as many more women have joined us donating their time, resources, and expertise, as well as the support of funders whose mission and vision aligned with our own for the promotion of the women’s movement.

The late 2010s was a significant period of reflection for our network. Debates on the ‘ngo-isation’ of the women’s movement and generational differences in approaches to activism, to name but two examples, meant we engaged in a deliberate period of discussion. These debates took a new vibrancy when I was arrested and imprisoned in Iran under the charges of dabbling in feminism and being part of WLUML, and questions of safety and security of our networkers took on greater significance for the network. After an impressive and worldwide campaigning by WLUML and the transnational women’s movement, from Indonesia to Senegal, Brazil, and Canada, we celebrated my freedom. We also knew it was time to come together and reassess WLUML’s heart, soul, and
future.

In this context, in 2017, a general meeting, ‘The Future of Women’s Rights as Human Rights in Muslim Contexts’, was organised in Montreal. During this meeting the WLUML International Council made the decision that, for five years, WLUML would operate almost entirely without seeking external funding, rely on the donated time and resources of its members, and the research our academic members could undertake. This was to, once again, establish WLUML as an independent women’s movement. Despite being challenging at times, we are confident this decision has enabled us to strengthen our commitment to prioritise women’s interests. Our continuous presence in the public sphere in support of women’s human rights has demonstrated to old and new networkers alike that we are an effective and independent force for the promotion of gender equality. Having established that we can be self-sufficient we are ready to join our allies and obtain funds to expand our research in support of the women’s movement in these tumultuous times.

Indeed, the start of 2022 marks the end of this five year period, and we are so proud and grateful to our networkers for all we have collectively achieved during this time. In 2021 alone, we published some 15 op-eds and articles through influential platforms and concluded our eight-part webinar series in support of Afghan women (see our No Peace Without Women’s Rights Campaign). We began our new programme in earnest, Constitutionalising Women’s Rights, looking at the role of constitutions in post-conflict societies with the immediate focus on Afghanistan, Sudan, and Syria. As part of our ‘Bodily Autonomy, Integrity, and Sexual Rights’ programme, we have conducted exciting new research on the relationship between love and politics in Muslim context that examines the control of women’s sexuality both physically and emotionally. Celebrating women rappers, and the influence of art in feminist struggles, we published Hilal Işık’s ‘Rebel with Rhythm, Shatter with Words’ which explores how Muslim women have used rap music to voice their
objections to sexism and racism. Indeed this very successful research followed our earlier research based publication ‘Chic Resistance’ by Shirin Abdmolaei that looked into the unconventional area of collective public resistance to various forms of oppression by politicising various cultural fields that hitherto were considered apolitical.

Needless to say, 2020 and 2021 were difficult and testing years for the transnational women’s movement. Women had to deal with the reality of COVID-19 which threw into light many different forms of inequality, not least gender inequality. We also had to face the reality of diverse forms of cultural and legal violence reported world-wide. Afghan women strove for meaningful inclusion and the consideration of women’s rights during the ill-fated peace talks, but the Taliban were still allowed to return to power. Afghan women now face an uncertain future as we witness the progressive roll back of their legal and social advancements. This is largely because the field of international relations has failed to consider gender equality as an integral part of their policy, despite having passed the 1325 resolution that recognizes the role of women and peacemaking. It is time for the transnational movements to focus on making the concerns of gender and women’s human rights an integral part of their states’ foreign policies, simply claiming to have feminist development or international polices will not be effective.

Yet, despite the devastating development and mishaps that brought the Taliban back to power in 2021, the women of Afghanistan have not given up. They have mobilised to resist and are pushing boundaries demanding justice, plural democracy, and gender equality. WLUML stands by the women and their quest, and we will do all we can to strengthen their voices internationally. This year WLUML continues the development of its Transformative Feminist Leadership Institute with a revised curriculum. We launched our Human Rights And Women-Centred Islamic Perspectives program, supporting women’s rights, inclusive institutions, freedoms of thought and promotion of peace. And, we will continue to celebrate the power of the arts in the struggle for gender equality.

In peace and sisterhood,

Islam, Islamisation and Women in Africa