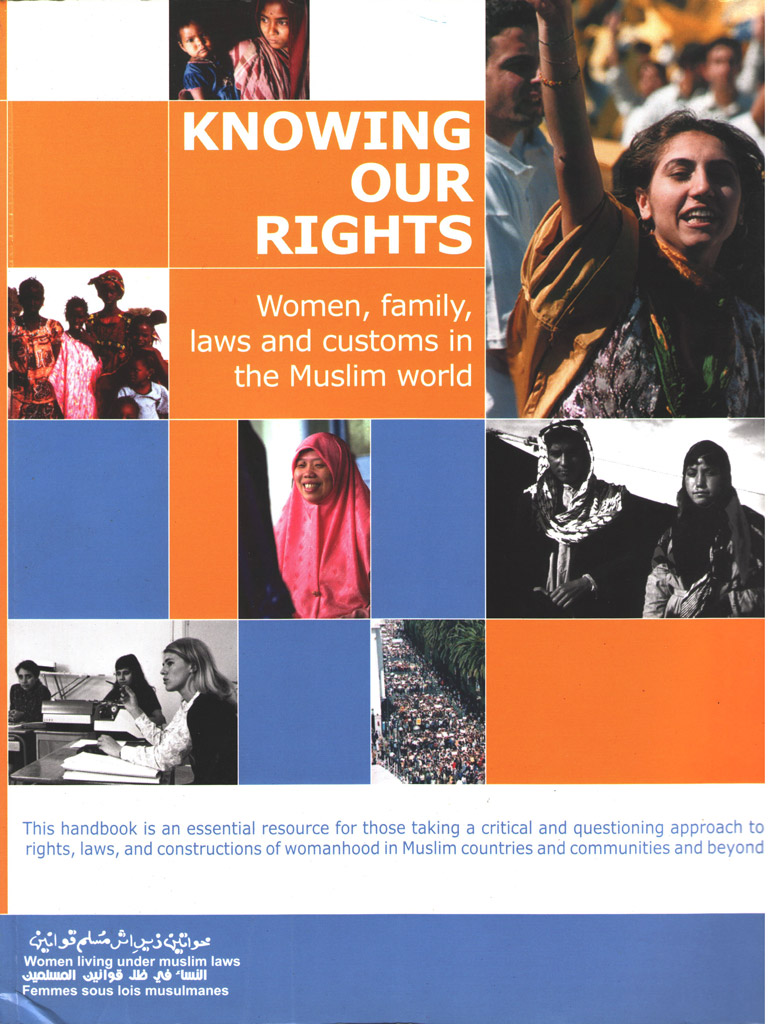 In much of the Muslim world, women’s lack of knowledge about statutory provisions and about the sources of customs and practices applied in their immediate community obstructs their ability to change their circumstances. This understanding was the basis for the Women & Law in the Muslim World Programme of the international solidarity network, Women Living Under Muslim Laws (WLUML).

Our action-research sought to examine and analyze how customs, laws and culture interact to define women’s lives and how the dynamics of religion and politics intersect with this.

Knowing Our Rights forms part of the international synthesis of the Women & Law in the Muslim World Programme and is based on some 10 years of field experience, research, analysis by multi-disciplinary teams of networkers in over 20 countries across Asia, Africa and the Middle East. These include majority and minority Muslim communities; communities which are governed by family laws based on Muslim laws and those which are subject to a general law applicable to all communities; legal systems that formally recognize customary laws, and those that do not; as well as diverse (and changing) political situations.

Research on women in the family was of principal importance because it is in the family that we experience imposed definitions of gender-appropriate roles on a daily basis.

This Handbook is an essential resource for those taking a critical and questioning approach to rights, laws, and constructions of womanhood in Muslim countries and communities and beyond.

The need for a Women & Law in the Muslim World action-research programme was identified in WLUML’s 1986 Aramon Plan of Action, and crystallized during WLUML’s first 2 two collective projects – 1988 Exchange Programme and the Qur’anic Interpretations Meeting of 1990.

Example: Polygamy is customarily mandated in some sections of the Muslim community in Nigeria, permitted without restrictions (other than the number of wives) in India; permitted provided the wives are given separate residences in Sudan; permitted only with court oversight in Malaysia; and altogether prohibited in Tunisia. Moreover, all of these systems claim Islam as the justification for their laws and practices. What is assumed to be ‘Muslim’ in one community may be unknown, or even be considered ‘unIslamic’, in other Muslim communities.

Such knowledge is vital to those taking a critical and questioning approach to rights, laws, and constructions of womanhood. Women in all contexts, whether secular or where laws are framed with reference to Islam need this information because of extreme right-wing politico-religious movements are rising in all contexts.

The Handbook, Knowing Our Rights, is the result of some 10 years of research and collective analysis, which has at various points involved almost all active networkers linked through WLUML.

There is a need to distinguish between:

The Handbook also includes data and analysis regarding: Egypt, Tunisia, Yemen, Lebanon, Saudi Arabia given the significance of these countries in the development of family laws.

The 1992 Lahore W&L planning meeting developed a common list of research themes but gave each country team the autonomy to choose its research focus. The research was concentrated on three themes:

The theme of women in the family is the focus of this first volume because the family is the site of women’s greatest oppression and the interconnection of laws, religion, custom). Also, very often laws and customs relating to marriage, rights within marriage, and divorce determine women’s choices in relation to the other two themes.

Limitations of the Handbook

UNDERSTANDINGS: Implications for Agencies and NGOs

Agencies and NGOs need to: