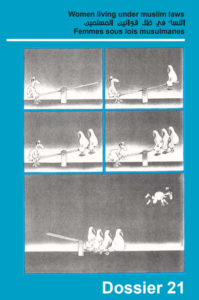 Fundamentalist political movements and their onslaught on women have been subject to much debate over the years and have become one of the key concerns of our network.

Fundamentalist political movements and their onslaught on women have been subject to much debate over the years and have become one of the key concerns of our network. The paper by Janet Afary surveys content and character of this systematic attack on women’s rights in the name of religion and comes up with reactions, responses and mobilizational strategies to undermine the fundamentalist(s) politics.

Ever since the early days of the 1979 revolution in Iran, women’s rights activists have keenly been interested in understanding the situation & struggles of Iranian women. The contribution by Azadeh Kian provides a fascinating description of the new protagonists for women’s political and social rights in today’s Iran.

The Iranian regime, over the last two decades has done its best to maintain a tight hold on all foreign influence and has in fact tried exporting its own ideological products internationally (e.g. Hezbollah in Lebanon, Islamic Students Organisation in Pakistan); The main focus for Iranian voices for change and democratisation, has come to revolve around a strategy of ‘reform from within’ (maybe, for lack of any other realistic possibilities), giving primacy to a re-interpretation of Muslim religious discourse of the state; One of the most prominent examples of progressive interpretation of religious texts favourable to women in the recent Iranian history has been that of the cleric & legal scholar Hojjat Al Salem Sai’dzadeh. The outstanding work of Saidzadeh has earned him the wrath of the more conservative of the Iranian Mollahs. Saidzadeh’s work is little known outside Iran and it is very important that reformers, liberal voices and activists for change elsewhere in the Muslim world discover it. Ziba Mir Hossieni has done great service to us all by introducing Sai’dzadeh’s writings & providing a translation of one his works. Winds of change are slowly eroding the totalising hold of the Iranian authorities. The one time dreaded ‘Moral’ police which kept people at bay by keeping them in ‘right Islamic order’ is now not so omnipresent in Tehran.

From a dominantly Shia Iran where the clergy holds legal sway on matters political and personal, we move on to Bangladesh a largely Sunni Muslim context with a secular system of jurisprudence and a fervent civil society. Less regimented and organised compared to the religious institutions of Iran, Sunni Islam in Bangladesh historically gained currency through mystical ‘sufi’ saints or ‘Pirs’ who were products of local society in Bengal. These freewheeling and cult like spaces built around ‘pirs’ have continued over hundreds of years but parts of Bangladesh have witnessed an Islamisation influenced by factors alien to local Islam. During the period of a military dictatorship, Islam was officially invoked leading to many a parachuted measures to institutionalise informally mediated modes of faith.

Remodelling of the ‘Pirs’ though not officially sponsored has been one development. As in most South Asian countries, decades of steady flow of male labour migration to the west and to the economies of the Arabian Gulf have caused much change in the local configuration of power relations. Repatriation of money by working class immigrants has given them some degree of local influence in their rural country of origin. Returning influential immigrants have tried to ‘rectify’ and re-invent their local Pirs into ‘Islamically correct’ and properly scripturalised Sunni variety; based on an imaginary transcultural Islam which they have constructed in bits and pieces that they have picked up from many countries and cultures during their absence from Bangladesh. The paper by Katy Gardner recounts the story of religious change underway in a part of Bangladesh and its connections with Bangladeshi migrant communities which through its own internationalisation is now remoulding its local Islam.

The situation of predominantly Muslim societies is somewhat different when compared to Sri Lanka a multi religious society where Muslims constitute a small minority community. The Sri Lankan Muslim elites, faced with processes leading to polarisation of different religious communities with distinct ethno-religio-political representation, got involved in their own project to construct a homogenous community identity. This process over the last four decades has increasingly encountered the emergence of conservative and fundamentalist political currents, which at moments in time even suggested that Sri Lankan Muslims adopt Arabic as their language, as it would bring them in line with ‘real’ Islam. This process has also slowly been leading to renaming of institutions with Arabic words instead of those traditionally in say Tamil.

The paper by Nuhuman provides a historical overview of the processes of segregation and subordination of Muslim women in Sri Lanka in wake of religious right gaining ground. Picking up the threads of the discussion in the opening paper of this Dossier, Homa Hoodfar explores the challenges facing women’s initiatives across Muslim contexts with all their cultural and social diversity.