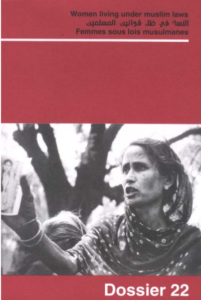 History is replete with examples of use of religion for social-political mobilization and for community control. The backdrop for this Dossier reflects processes leading sociological Muslims to becoming institutionalised subjects of organised Islamic nation states, communities and families.

As we prepared to wrap up this issue we were struck with the sad news of the death of Begum Sufia Kamal the well known poet, outspoken voice for women’s rights and democracy in Bangladesh. We dedicate this issue of the Dossier to her memory.

History is replete with examples of use of religion for social-political mobilization and for community control. The backdrop for this Dossier reflects processes leading sociological Muslims to becoming institutionalised subjects of organised Islamic nation states, communities and families.

Modelling/remodelling of the identity of social groups under larger religious identity has been a tendency both within efforts to build national culture and to deploy a common homogenous identity over diverse local & regional communities. Identities that were syncretic, ambiguous and  localised have progressively been gaining a ‘fixity’ of religio-legal categories enforced by the state and also by greater organisation/mobilization of influential religious movements trying to promote ‘authentic Islam’. These process became intensified during the 19th century under colonisation and assumed newer forms in the postcolonial phase of globalisation, where a transnational Islamic identity is being constructed, notably among diasporic or newly converted Muslims of diverse national and ethnic origins. The processes at work here cover a wide spectrum between religion, custom, local cultural practice, law and politics.

The multi religious, multi ethnic environment of Sri-Lanka ever since colonisation (when religio-ethnic classifications were imposed for ‘administration’) has been sliding into a full scale polarisation between different religious or ethnic groups, as completely distinct and uncommon entities, leading to the destructive communalisation of the Muslims there.

An ethnically diverse Muslim minority today sees itself (also being viewed by outsiders) an as ethnically separate group. Faizun Zackariya and N. Shanmugaratnam draw a detailed historical picture of ‘communalisation’ process and point out that, as elsewhere, women in that country have become the worst victims of the ethno-nationalist project as it is on them that falls the burden of socialisation.

Eqbal Ahmed’s excellent review of the process of development and expansion of an internationalised Islamist activism (the networks, infrastructures and manufacture of the men involved in Jehad (‘holy’ war) during the war against the Russians in Afghanistan) provides a valuable understanding of both, the geo-politics and the dangerous implications of the nexus between guns (gun traders), gold (drug peddlers) and God.

We provide a small selection of newspaper articles on the now beleaguered ‘Islamisation’ project (known as the 15th Constitutional Amendment) of the recently deposed Pakistan government. The remarkable opposition from women’s rights and civil rights activists in Pakistan to this project, stands out as a lesson for other parts of the world that are likely to face authoritarian projects in the name of religion as a means of greater political regulation and social control.

In Uzbekistan which was once part of the former Soviet union, a series of reversals or hurdles to women’s autonomy and freedom have emerged. The paper by Marfua Tokhtakhodjaeva shows how the Uzbek media is involved in the constructing new mythical stereotypes seemingly rooted in ‘tradition’ and calling for women’s return to the domestic sphere, seeking revival of polygamy and ‘allocation of responsibilities to husband’s for women’s well being’; And all this is justified as coming from an imagined religio-legal doctrine.

But, the Shariat is surely not a code of law but a body of concepts, principles & precepts with considerable heterogeneity. The translation of the Shariat into actual functioning legal procedures has varied from region to region. While, this process of translation-conversion has mostly meant creating a structured corpus of Muslim laws to be implemented by an administrative legal system, customary and local cultural practices co-exist alongside where dominant & powerful social groups did not permit the taking away of local authority by a modern state system.

Indonesia the largest Muslim country in the world, has witnessed a continued Islamisation of its Family law ; absorption & subsumption of prevalent practices into a logic of codification and reform according to Muslim Law. In light of the Governments 1988 ‘Compilation of Islamic law’, some limited changes in the Inheritance laws favourable to women have taken place. The paper by Cammack examines the intricacies of this process in Indonesia.

Sami Aldeeb writing from Switzerland uncovers the discriminatory nature of Personal Status laws in different Arab & North African countries and argues for the need to unify and modernise these laws to make them favourable to women.

Muslim Personal law in India is a British enactment and is practised as such and not because its a devine immutable thing. This dated law requires modification and change to allow greater rights to women. A. A. Engineer, the social reformer, activist and theologian makes a case for change.

The courts in Bangladesh in the last few years, produced some progressive and pioneering jugements in Muslim legal matters of post divorce maintenance providing a much need renewal of regional discussion on this very important subject. A practicing lawyer Faustina Pereira presents her viewpoint.

Women in Palestinian community inside Israel, Israeli Arab women and women in the autonomous Palestinian territories all fight daily at various levels to seek an improvement in status of women. We reproduce two separate accounts (by Dahlia Scheindlin and David Sharrock) of how these battles for change and survival are underway.

In April of 1998 women’s rights activists in the Gaza and the West bank town of Ramallah organised a Women’s Model Parliament and overwhelmingly voted for a total ban on Polygamy.

– Three young women confronted with patriarchal Arab men in their own community decided to move out of their neighbourhood and live in Jerusalem where they now face the wrath of conservative and orthodox Jews.

Custom, tradition and family honour are invoked with ease as a rationale to forced marriage transactions. Some representatives of immigrant communities in the Europe consider these private matters   of family as well as minority rights that, should the state interfere, would be violated. Reports from the UK and Turkey demonstrate the increased use of forced marriages that are unacceptable whether in the countries of original culture or in country of immigration and the need for universal laws and codes of conduct which reprimand patriarchal  control of women’s life and sexuality.

Forced marriages of British Muslim women (particularly from immigrant communities of South Asian origin) in the UK have been on a rise pushing the Government there to take notice and institute an official body to look into the scope of the problem. (A News Report from a British newspaper).

A feminist research effort by Pinar Ilkkaracan and activists of ‘Women for Women’s Human rights’ examine the use of customary practices such as forced marriages, polygamy, to control women’s sexuality in Turkey and proposes preventive strategies against these.