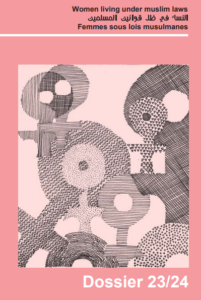 The Dossier is dedicated to a question which comes up again and again in the discussions about women in the Muslim world: the centrality of religion as an analytical concept. Most articles included in this issue discuss, under one form or another the right to define oneself as secular vs a “natural” religious identity, and all the potential epistemological bias in the analysis of a specific situation that could follow the lack of conceptual clarity in these matters.

As an international solidarity network geared towards women’s taking action, WLUML has always advocated for the coexistence of different strategies, from working within the framework of religion through reinterpretation of the Qur’an, to working from an entirely secular standpoint. In practice, on the ground, we have numerous examples of how different groups of women using different strategies to advance their rights complement each other. We also witnessed how women move from one strategy to another to adjust to an evolving political situation. But we also always advocated the need to be aware that these are choices, not destiny. And that no one born in a country or community predominantly Muslim should be branded “Muslim” unless s/he is a declared believer of this faith.

Reflecting on the women’s movement in Iran, Shahrazad Mojab, Asfaneh Najmabadi and Nikki Keddie discuss this issue either from a historical perspective or from an epistemological point of view. Along the same lines, Marieme Hélie-Lucas points at the imposition of a “Muslim” identity on Algerian citizens and at the ideological collusion between fundamentalists and the European Left and Human Rigths community, in the name of respect of different cultures and identity. Farida Shaheed denounces the conceptual over simplification in the assumption of a uni-polar relationship between religion and women’s agency in the Muslim world. Similarly, reflecting on Indian history, Amartya Sen points at the presumption of identity politics that only one identity is permitted and, taking the opposite point of view, defines an individual as an intersection of a variety of identities: living cultures absorb various historical influences for their greater benefit. Avtar Brah discusses race, ethnicity and cultural difference, and how it affects migrants in the labour market in the UK.

Two examples, from Kosovo and from Algeria, show the rise of active extreme right political forces that have been fed and sustained by such identity politics. Zarana Papic speaks of broken brotherhood in ex Yugoslavia and of feminists’ struggle to reach out to other women accross religious, ethnic and national boundaries. Mahl relates recent events in Algeria where religious fundamentalists instigated real femicide by ordinary people-not just the usual trained troops of fundamentalists-, a terrible step taken towards the brutalisation of a whole society. Both examples warn about a real political danger, the resurgence of fascism in the world today and the role that the women’s movement, both nationally and internationally, can play in keeping these forces at bay.

We end this issue with words of hope from Flora Brovina, medical doctor, poet and leading figure of feminism in the whole of ex-Yugoslavia. She declared in her trial in Serbia: “I dedicated my whole life to children and children do not choose their ethnicity, children do not know their ethnicity if their parents do not tell them. My country is where my friends are, where my poems are read”.