Dossier 30-31: The Struggle for Secularism in Europe and North America 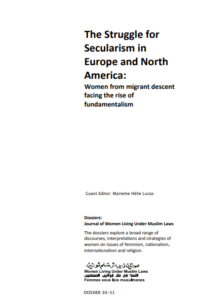 Edited by Algerian sociologist and WLUML founder, Marieme Hélie-Lucas, this bumper dossier brings you papers by over 15 contributors, including Karima Bennoune: The Law of the Republic Versus the ‘Law of the Brothers’: A story of France’s law banning religious symbols in public; Pragna Patel: Cohesion, Multi-Faithism and the Erosion of Secular Spaces in the UK: Implications for the human rights of minority women; and Gita Sahgal: ‘The Question Asked by Satan’: Doubt, dissent and discrimination in 21st-century Britain.

Marieme Hélie-Lucas explains in her introduction that the dossier “addresses a burning issue: the specificity of the struggle that women – be they Muslim or ‘of Muslim descent’ – are waging in Europe and North America, and the way in which their struggle and their strategic decisions are perceived elsewhere, outside the context… Progressive forces in Europe are afraid to… be labelled ‘Islamophobic’ and racist. Bending to both the pressure from fundamentalists (a tactic we know well for they use the same one to silence us in our countries) and to the guilt feelings inherited from the colonial past, progressive forces fear above all to confront Muslim fundamentalists (and not other fundamentalisms), as they know that fundamentalists will accuse them to be ‘against Islam’, as they claim they are Islam and the only legitimate representatives of the true Islam.”