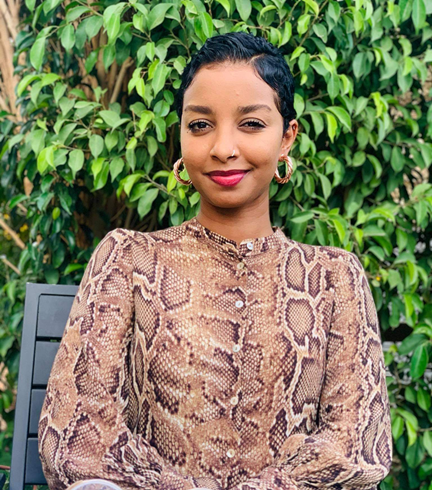 Fadia Khalaf: I see myself neither as a hero nor an icon but rather as a daughter of the revolution. The threats to my life may make me more careful but they cannot stop me or other young women leaders who want to change the culture of violence and impunity. We believe we can make a change. We will make our country and culture peaceful and peace-loving even if it takes time. We are ready for the long haul.

Fadia Khalaf is among the many young women who have given a new face to Sudan. One that not only the world has yet to fully recognized,  but a reality that the elite male Sudanese have yet to come to terms with. The unprecedented number of women at the forefront of the demonstrations against the regime of Omar al-Bashir in 2019 led the media to dub the uprising, ‘A Woman  Revolution’. The world watched in amazement the 22-year-old student,  Alaa  Salah in her symbolic white Tuba cheering the demonstrators and inviting them to launch a  revolution demanding an end to repression and demand freedom, peace, equality and justice.  While the rest of the world was surprised to see a sea of women, who according to BBC at some pivotal times formed  70%  of street demonstrators, the Sudanese saw it as the result of the explosion of bottled up repression, said Fadia. Indeed, women have played important roles at crucial moments in Sudan’s history, both in fighting colonialism and in demanding the right to vote, yet each time they were largely excluded from the corridors of power.

Under Omar al-Bashir’s regime, women were deprived of freedoms such as walking in public without a male chaperon, wearing trousers or even their traditional Sudanese garment the way their mothers and grandmothers had put on, to leave their hair uncovered, to voice their opinions on social media without fear, or to share a meal with male friends—all of which were criminalized by the former regime’s public order laws. These laws were designed to quash dissent and also to target women, particularly those from the most marginalized and working-class women, who could be jailed for trying to provide for their families. 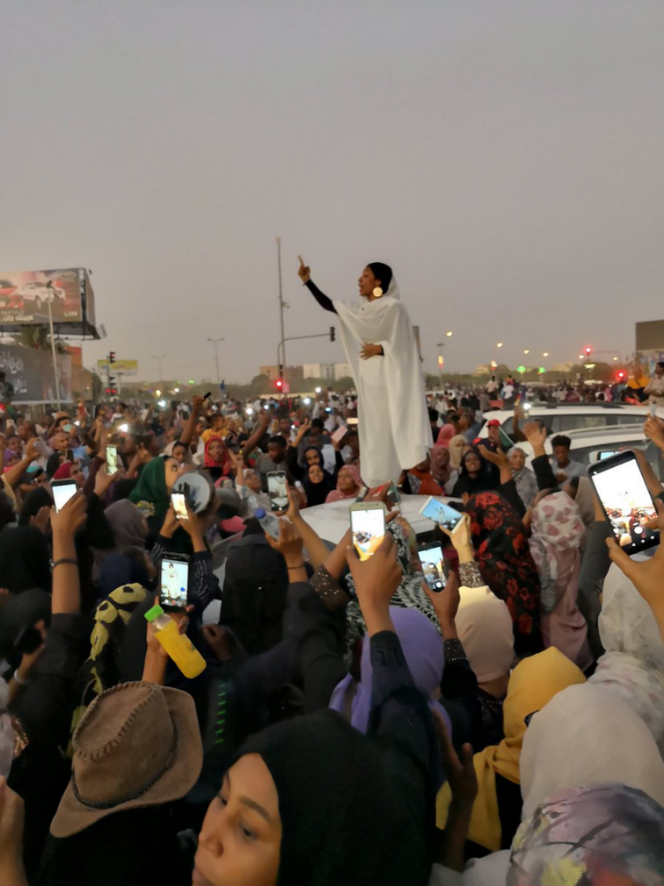 A video of Salah leading protesters in songs and chants went viral on social media. It shows Salah calling out, “In the name of religion, they killed us,” with the crowd responding, “Revolution!”

All these instances of oppression, along with increased poverty and militarization of society led the public and women to launch an uprising by pouring into the street and shout enough is enough. They demanded a new political system that is based on justice, just laws,  and equality.  As Alaa Salah put it; “Women-led resistance committees and sit-ins planned protest routes, and disobeyed curfews, even in the midst of a declared state of emergency that left them vulnerable to security forces. Many were teargassed, threatened, assaulted, and thrown in jail without any charge or due process. Both women and men also faced sexual harassment and were raped. Women also faced retaliation from their own families for participating in the protests.”

In April 2019 the  military changed sides and joined the revolution, putting an end to 30 years of the repressive regime of Omar al-Bashir.   Then it was announced they would head a two year-long transition government under their leadership of the Military Council which was made up of many of the old faces who were involved in violence and attracity against the nation..

Fadia Khan reflecting about the time said:  “Their announcement sounded like another coup and was not acceptable to us who had been in the street-facing bullet and teargas and sexual harassment and more. We joined the force and organized more sit-in and demonstration days after days in front of military quarters. And also we made sure that international media is there to report. I talked to many journalists on the phone and in person. Finally, the military or at least some of them showed their true colour. They unleashed forces of violence and killed many of the demonstrators and throw them into the Nile. Women were killed, thrown in jail and worse raped and others simply disappeared.   Those were really sad days.  We had hoped that our revolution to be bloodless, but those with guns had different ideas. I guess it is hard for them to change their habitus after 30 years of using force to get what they want”

The military, unable to quash the resistance, agreed to a power-sharing deal with the revolution coordinating committee;  Forces of Freedom and Change Alliance (FFC)  which was a collation of various groups and organizations that had participated in the revolution. However, it was the same old story. Once the revolution was successful they wanted women to go home and let them rule.  Few women were included in the government positions,  even though the women’s organization had provided them with a list of qualified women.  The exception was  Nemat Abdullah Mohamed Khair who became the first woman Chief Justice of Sudan (head of the Sudanese judiciary).

This token position even if it was an important one,  did not satisfy women who had demanded women to be allocated 50%  of government positions and definitely to be included in the committee to draft the new constitution.  Their demands fell on deaf ears. So, the Coalition of Sudanese Women’s Civil And Political Groups (MANSAM), together with the NGO Working Group on Women, Peace and Security launched a  campaign both inside and outside the country and reaching out to the women of the region and international community. They are intending to ensure that women’s diverse forces to be included in the peace talks, and the constitution drafting and debates. They are focusing on two key issues. First, women’s meaningful participation and protection of women’s rights; and second, accountability for the violence committed against the nation and protestors and disarmament. In her speech to the UN Security Council, Alla Saleh clearly explained their justification for their demands; “Given women’s pivotal role in working towards peace and development, in the promotion of human rights, and in providing humanitarian assistance to communities in need, there is no excuse for us not to have an equal seat at every single table. If we are not represented at the peace table, and if we don’t have a meaningful voice in parliament, our rights will not be guaranteed, and discriminatory and restrictive laws will remain unchanged, continuing the cycle of instability and violence. After decades of struggle and all that we risked to peacefully end Bashir’s dictatorship—gender inequality is not and will never be acceptable to the women and girls of Sudan. I hope it is equally unacceptable to the members of this Chamber” (see Alaa Salah statement at WPS 2019 ).

Fadia Khalaf told us: ” We knew that to protect the bring about the revolutionary change we had to be present and make sure the eyes of the world is on us. In a way, a new phase of the journey of revolution had started. We wanted to communicate to the military peacefully that we want democracy and justice. But they killed many. Since then,  many of us have formed a committee to find out who ordered the killing, how many are disappeared and how many were killed. Through hard work,, visiting prisons and hospitals we have identified at least 108 dead who were thrown in the Nile. We went to the families of people and talked to them and bounded ties for them to know that their loved ones have not been forgotten and we promise to do our best either to find them or find out what happened to them. According to the last update of our Initiative 23 person still missing and I believe they are more than 23 since there are many who are still not reported.. And some women missing but not officially reported to the police.

After a long period of demanding the sovereign council to look after this serious case of the enforced disappearance and hear the families out, the new public prosecutor was assigned. An investigation committee was established to investigate the disappearance of all these people since the June 3rd incident and all the following incidents and violations by the forces that caused people to be missing. I was chosen as a member of this committee of investigation in 2019. We have reported our findings through social media. However, this had made some of us including me subject to threat. I am more careful because I do not want to put my family in danger.  However, these threads do not make me stop and put an end to my commitment to bring the truth to the public.  A large number of young women myself included believe we cannot make a peaceful country if we allow the violence committed in this way to be overlooked. We need to bring to justice, those who ordered the killing and have a national reconciliation program to address the culture of violence and impunity that has become so dominant in political culture after 30 years of living under the repressive regime of the Al-Bashir who killed,  imprisoned, disappeared and lashed people in public in the name of religion.  We need a new culture that is based on the rule of just laws that reflect the aspirations of the revolution. We know that it is not easy but many of us are ready to work to create it.”