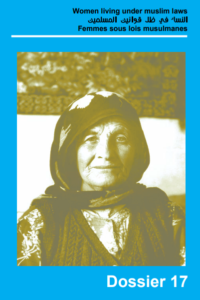 This issue of the Dossiers focuses on two main areas: the role of culture in the making of religious identities; and progressive interpretations within Islam. The issue of culture viz religion and identity is crucial to us; one of the aims of WLUML is to facilitate debate towards disentangling cultural identity from religious and political identities.

The paper by Ayesha Imam sets the terms of the debate by exploring sexuality in Islam – and deconstructing its norms, historically and in different Muslim set ups. The Senegalese writer Aminata Sow Fall assesses the plurality of cultures in Senegal and describes people’s daily practices of religious syncretism. Nasr Abou Zaid is the Egyptian professor who was forcibly divorced from his wife by a fatwa pronouned by fundamentalist Egyptians alleging that his writings made him an apostate, a position later confirmed by the highest legal authority in Egypt, the Egyptian Supreme Court,- leaving both secular and generally democratic opinion in a state of shock. He explores “the racial” and “the ethnic” in Arabic language as both a root and an expression of the historical evolution of discrimination between women and men, Arabs and non Arabs. Elie Dib Wardini questions the monolithic construction of boundaries and identities by discussing the intertwined concepts of nationality, culture, religion, language and political ideologies . We have included a special section on Afghanistan, which remains the most recent burning point of religious extreme Right state action against women. From women within Afghanistan itself, from Afghan women refugees in neighbouring countries, from women from Muslim background and from the international community at large, voices were raised in defence of Afghan women, so far in vain. As in some our previous Dossiers, a section is devoted to progressive and women’s interpretations of Islam. In our next issue, we will give more space to secular writings. Bouthaina Shaaban looks at the hidden history of women interpreters. She focuses on Nazira Zin-al-Din, a knowledgeable Muslim women scholar from Egypt who wrote in the 1920s. Ziba Mir Hosseini explores the dialectical relation between a secularist stand for women’s rights and a feminist reading of the Shari’a in today Iran, through the work and role of scholars and the entryist strategies of women’s rights organisations. Peter Clark reviews the contemporary commentary work of Pr Muhammad Shahrur from Damascus. Rather than a purely religious commentary, his books are a social and political analysis of closed Arab Muslim societies and a reassertion of the liberal tradition in Islam.