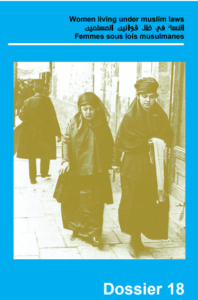 The Dossiers explore and synthesize a broad range of feelings, interpretations and strategies of women on issues of feminism, nationalism, internationalism, and religion. Our dossiers had announced the first two Asian lesbian conferences; we are now beginning to receive articles about the situation of lesbians in Muslim countries and communities which we will be publishing in the future issues.

To the lonely voice of a Pakistani American lesbian woman wondering how her grandmother would react to her sexual mores, responds the powerful short story of Ismat Chugtai, written more than 50 years ago – and banned at the time.

A study of temporary marriages (mut’a) in a Lebanese American Muslim community, by Linda Walbridge, shows how some ‘local’ imams are promoting the practice of mut’a as a way to allow modern teenagers of the community to have sexual freedom, within the acceptable “religious-moral parameters”. This re-interpretation of a practice which we only knew as highly unfavourable to women and girls, provides evidence of how religious edicts pulled out of Iranian Shia Islamic framework are being applied in an alien diasporic context to facilitate “cultural accomodation”; community and religious spokesmen might want to justify this practice, as being rooted in “authentic culture” and may hide behind the smokescreen of “cultural pluralism” in order to bypass prevailing marriage laws of the land, but we hope women’s rights activists will not close their eyes.

The article on Algeria by Karima Bennoune, describes, amongst other atrocities against women, examples of the terrible use that fundamentalists have made of mut’a in Algeria. Apart from a stinging denounciation of the crimes of against women in Algeria, it sets out the backdrop of the present situation; in particular, it counters the commonly adopted view that fundamentalist violence started as a protest against the government putting an end to the electoral process in 1992 and it shows that this violence started -and escalated- long before these events. She demonstrates the collusion of the government with fundamentalists and the way they traded women’s constitutional rights. It also clearly links the defence and promotion of women’s human rights to the very existence of democracy in Algeria. She gives a voice to Algerian feminists in this battle for life.

The situation is deteriorating every single day in Algeria: villages are attacked on a daily basis, and inhabitants slaughtered irrespective of age or sex. Future dossiers will keep you up to date. In the sections on campaigns and in the newsbriefs, you will find information on the ongoing campaign by Algerian women to collect a million signatures against the existing family law which has bound women since 1984. So called “moderate islamists” in Algeria are actively mobilizing against the women’s petition and claim, in a virulent appeal to “protect Algerian national identity” and to prevent “an act of revolt against the word of God”. They are collecting 3 million signatures to defend the discriminatory family law in force in Algeria.

In Sudan, the other showcase of fundamentalists’ policies in the world, new laws have been passed which further limit women’s access to public life: the decency laws. Sondra Hale analyzes the Islamisation project as part and parcel of a cultural-national construction of identity which obscures class approach and makes a move towards essentialism, while a Sudanese feminist addresses the issue of violence against women in the light of these new laws. A warm tribute is paid to Mahmoud Mohammad Taha, a well known and respected progressive interpreter of the Qu’ran, murdered [by the then government] in 1985 for his writings. To this date his books remain banned in Sudan.

The paper by Rubyia Mehdi on rape in Pakistan denounces the assimilation of rape to sex outside marriage (fornication and adultery) and links this law to the political use of Islam by the then government. Finally the contribution by Kazi & Gangoly on customary practices in Bihar gives concrete examples of ‘what muslims do’ in a sociological and and daily life sense as different from what ‘muslim law(s) [of the land] say’, or ‘what Islam says’ in a theological sense.